Britain is seeking to counter a cold war-style “information war” by investing in a range of projects, from “rebranding” Ukraine to influencing Russian speakers in Baltic states.
The UK’s efforts have included hiring M&C Saatchi – the advertising agency synonymous with Tory election campaigns – to run a project with the Foreign Office to rehabilitate Britain’s ally Ukraine, including using social media to target viewers of the Eurovision Song Contest, which was hosted by Kiev this summer.
The Foreign Office is also funding nascent programmes to identify how Britain can influence Russian-speaking minorities in Baltic states – regarded as a potential flashpoint between Nato and a resurgent Russia. Another initiative will invite Russian journalists to “themed tours” of the UK.

The funding is a response to an increasingly muscular “infowars” campaign in which Russia-backed media outlets have been accused of seeking to meddle in the EU referendum as well as elections in the US, France and Germany. Tim Duffy, UK group chairman of M&C Saatchi, said it was company policy not to comment on government contracts. However, partially redacted documents give an insight into the £100,000 contract, under which the agency works with Foreign Office teams, Britain’s embassy in Kiev and Ukrainian government officials.
English-speaking tourists, investors and media, including CNN and the BBC, were listed as the intended audience for the project to rehabilitate Ukraine’s reputation, which opinion polls said tended to be negative. Part of the brief stipulated that the project should identify political and economic success stories and “show that Ukraine is a viable and successful country– despite recent issues with Russia and the annexation of Crimea”.
Britain’s broader package of assistance to Ukraine, which is engaged not just in a bitter conflict with Russian-backed separatists but also a propaganda war with the Kremlin, included £2.4m to help the Kiev government improve its communications strategy.
The Observer has established that the money came from the £1bn-plus conflict, stability and security fund (CSSF), a source so secret that a committee of senior MPs and peers meant to be scrutinising it have been denied access to the names of the 40 countries where it is spent. Other CSSF-funded projects in eastern Europe this year included nearly £1m on “target audience analysis” aimed at Russian-speaking minorities in Baltic states. 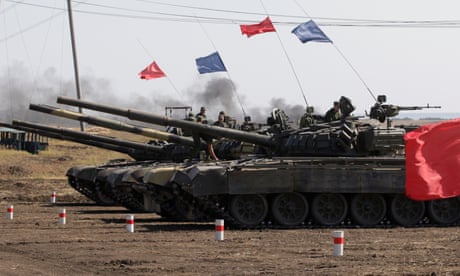 Separately, the Reuters Foundation has been awarded an £80,000 contract to deliver themed tours to Russian journalists and “online influencers”. “The main objective is to use British expertise to support and develop quality journalism in Russia by enabling Russian journalists and on-line influencers to develop skills and capacity while contributing to a greater understanding of UK journalistic standards and ethics,” the contract adds.
Another major research project by the Open University and the University of Manchester into the influence of RT – the Kremlin-backed media outlet formerly known as Russia Today – was launched last Thursday in London.


Advertisement
The launch of the Reframing Russia project was told by Ellen Mickiewicz, from Duke University in North Carolina, that while RT often appeared to be inept and hamfisted, its influence should not be underestimated. James Nixey, head of the Russia and Eurasia programme at Chatham House went further, claiming that the Russian government believed that it was at war and western governments were only now waking up to that.
Professor Stephen Hutchings, who is leading the research project, told the Observer that it was worth remembering that the FCO used to fund the BBC World Service, including its Russian-Language arm until 2014, when a toll was taken by cuts.
“The timing could not have been more unfortunate, with 2014 being the year in which the Ukraine crisis flared up,” he added.
He said that recent contracts appeared “are in some ways an attempt to compensate and play ‘catch-up’ in light of the growing concern in the FCO and defence communities about Russia’s extensive ‘propaganda’ operation.”

Many ESC fans from all over the world are so very sad because we lost Joy Fleming - one of the best singers ever.

Wolfgang Hampel - Wikipedia ( English ) - The Egg and I

Betty MacDonald fan club - The Stove and I